39 Clues “The Dead of Night” Book Review and AWESOME Giveaway!

I AM SUPER EXCITED to tell you I have some great giveaway things that the AWESOME people at Scholastic Books sent me to give away on my blog in honor of Book 3 – Cahills vs. Vespers “The Dead of Night” by Peter Lerangis.

Read on to the bottom of the review to see how you can enter to win some great prizes!

But first, my review!

39 Clues Cahills vs. Vespers, Book 3 – The Dead of Night Book

Dan and Amy Cahill didn’t want to be criminals. They didn’t want to steal priceless works of art and valuable historical objects. They just wanted to be “normal” kids, but they were Cahills and that meant they weren’t just like other kids. They were now the head of the most powerful family in the world and they are now facing their worst enemy, the Vespers. The Vespers have kidnapped seven of the Cahill family members and bad things will happen if Dan and Amy don’t do what Vesper 1 wants. In the last book, “A King’s Ransom” (read my review HERE), Dan and Amy were left in The Czech Republic just as one of their allies is being kidnapped by a couple of Vespers. Vesper 1 sends instructions to steal ANOTHER priceless artifact in a riddle. Now the Cahill kids have to figure out the riddle, get to Uzbekistan, steal the artifact, rescue their ally in Turkey and all before time runs out. What makes matters WORSE is that INTERPOL is after them too! Will Dan and Amy complete the mission, or will time run out?

I think this book is totally AWESOME! In case you don’t get the idea, I really like the 39 Clues series. It is a great action / adventure series for younger kids. Besides all the action, it takes place all over the world so you learn about geography and different cultures and you also learn some history. In this book I really liked Nellie, even though she was barely in the book, she did something that was VERY important to the plot so you know she is super smart. Mr. Lerangis made the book very exciting and left the book in a cliff hanger – **NOTE OFFICIAL PROTEST – Mr. Lerangis, I have to wait until AUGUST to find out what happens next 😉  One thing that worries me about the Cahill vs. Vespers series is Dan. He was always goofy and funny and in the new series he is being more serious because he is obsessed with the 39 Clues formula. So far it’s been OK but I am finding that I don’t like Dan as much as in the first series. I hope he doesn’t get too weird. I want to say more of what I liked about the book, but I don’t want to give too much away 🙂

I recommend this book and series to kids 9+ because of some non-graphic violence and some tense situations. There isn’t any bad language in the books. To learn more about Mr. Lerangis, please visit his website HERE. To learn more about The 39 Clues and the online game (it’s a cool kid friendly game) please check out the 39 Clues official website HERE.

Five out of five bookworms for “The Dead of Night”

NOW THE GIVE AWAYS!!!

All you have to do is comment to enter! MAKE SURE YOU LEAVE AN EMAIL ADDRESS SO I CAN CONTACT YOU IF YOU WIN! Emails aren’t published if you put it in the email box on the comment form. I will pick (actually my sister Josie picks) four names out of a hat of all the commentors. Of those four names Josie will pick one out of the hat for first prize and the other 3 will also win a prize! You have until Friday April 6th to enter and the winners will be announced on Saturday the 7th. If you are under 18 ask your parents if you can enter! Here are the prizes – 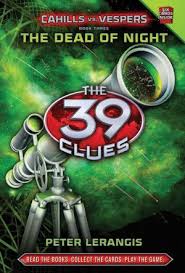 The three other winners will get a set of the author agent cards and a page of stickers.

Check back in August for my review of Book 4 “Shatterproof” by the AWESOME Roland Smith!

Like Loading...
‹ No Quote of the Week. Today I Have a Special Book Review
April is National Poetry Month – I Give You “Fred The Monkey King” ›

Thank you for reading my blog! I read every comment even if I don't get a chance to comment back!

What I am reading now!

Get an email subscription to my blog!

I write for the Upper Bucks Free Press!

HEY LOOK! CHECK OUT MY BOOK!

Check out my little sister’s blog! Animals and Art!

Proud Member of the –

Where the Awesome People Who Visit Me are from!